“We Are One: Reunifying A Country Divided” – An Event Summary

We started our conversation with a panel of NYC activists. As the moderator, Sarah Sayeed introduced and later on challenged our panelists with questions about their continuing work. She thanked September Eleventh Families for Peaceful Tomorrows for our leadership and highlighted the ways we are touched by divisiveness, commenting on our present struggles around immigration and Islamophobia. 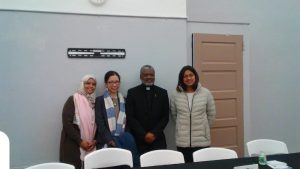 Sarah Sayeed, Sonia Lin, Deacon Rodney Beckford and Aniqa Nawabi (left to right) after inspiring us with their work during a panel discussion at the “We Are One” event.

Sarah Sayeed works as Senior Advisor in the Community Affairs Unit of the Mayor’s Office of New York City, where she is responsible for citywide Muslim engagement and facilitating cultural responsive agency outreach. Prior to this, she worked for over seven years at the Interfaith Center of New York, where she developed and implemented a five year partnership to bring together Catholic and Muslim social service providers in dialogue and joint action. She also designed and executed the Rabbi Marshall T. Meyer Retreats for Social Justice on a biannual basis, bringing together New York’s diverse grassroots religious leaders with secular and city agencies. Sarah has been involved for over two decades with Women in Islam, Inc., a social justice and human rights organization dedicated to the empowerment of women through knowledge and practice of Islam. She speaks regularly on Islam, Muslim women, civic engagement and interfaith relations. Sarah holds a B.A. in Sociology and Near East Studies from Princeton University and an M.A. and Ph.D. in Communication, University of Pennsylvania. She also holds a certificate in Reconciliation Leadership through the Institute for Global Leadership and completed the American Muslim Civic Leadership Institute (AMCLI) Fellows program.

We also had the pleasure of meeting Sonia Lin, Deputy Commissioner and General Counsel of the NYC Mayor’s Office of Immigrant Affairs. Sonia works to promote the well-being of our immigrant population that contributes to the very fabric of New York City. She elaborated how New Yorkers are being challenged by 1) a climate of anti-immigrant rhetoric backed up by malicious actions, 2) indiscriminate law enforcement, with arrests spiking at 88% more than under the previous administration while new barriers to keep immigrants out continue to appear and 3) by the discontinuation of DACA, a very successful program young DREAMERS relied upon for their security.

Sonia Lin is Deputy Commissioner and General Counsel at the NYC Mayor’s Office of Immigrant Affairs, where she leads the office’s policy and legal work on behalf of immigrant communities in New York City. Sonia has well over 15 years experience advocating for immigrants and workers in New York City. She joined MOIA from Cardozo Law School’s Immigration Justice Clinic, where she supervised law student practitioners and represented individuals and organizations in impact litigation and advocacy. She was previously a workers’ rights attorney in private practice and has served as an adjunct professor at Cardozo. Sonia graduated with honors from New York University School of Law, where she was a Root Tilden Kern scholar, and Yale College. After law school, Sonia clerked for the Honorable Denny Chin in the Southern District of New York. Prior to law school, Sonia was a paralegal case handler in the Legal Aid Society’s Immigration Law Unit.

Deacon Rodney Beckford, Director of our convening location, the Lt. J.P. Kennedy Center, and our generous host explained how the work he inspires at the Center happens not because there is a budget (there is none!) but because of the heartfelt desires of those who step through its doors and create the many programs that are essential to support one-another. Both new immigrants and residents born in the neighborhood jointly envision a strong community together.

Deacon Rodney Beckford is the Director of Lieutenant Joseph P. Kennedy Center. Mr. Beckford’s experience can be characterized as a diverse professional and social matrix spanning 48 years in business combined with extensive urban community involvement. He has held positions as an advertising executive, associate director of nutrition, The Executive Chief Steward at the United Nations and the North East regional Manager at an international beverage company, Vitality Inc. presently a division of Nestle Inc. Simultaneously, Mr. Beckford has served in numerous capacities for organizations such as Mind Builders Creative Arts Center as an officer and board member and NYC Mission Society’s Board of Managers for Minisink Camp and Town House. At present he is board member of two affordable housing corporations established by the Archdiocese and Catholic Charities of New York, The St. John Paul II Houses in Manhattan and Saint Augustine Houses in the Bronx. Mr. Beckford also serves on numerous advisory Councils, most notably The Archdiocesan Diaconal Council to the Cardinal Archbishop of New York.

Aniqa Nawabi is the Executive Director of the Muslim Community Network. The goal of her work is to change the perception of, and increase understanding about the diverse, local Muslim community and its many vital contributions through education and advocacy.

Aniqa Nawabi is the Executive Director of the Muslim Community Network (MCN.) She brings nearly a decade of experience in non-profit management and policy. Aniqa served as the Director of Development at Chhaya Community Development Corporation, a non-profit organization that works on the housing and immigrant rights of the South Asian community in NYC. As an Assistant Research Scholar at New York University, she worked on international development projects in Afghanistan. As an immigrant from Bangladesh and growing up as a Muslim American teenager in Queens, NY, she saw firsthand the struggles Muslim communities face in the post-9/11 era. 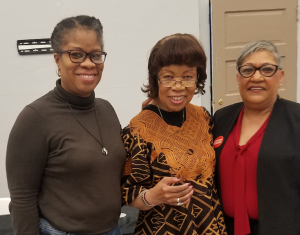 Our keynote speaker, Rev. Sharon W. Risher, passionately encouraged us to fight for gun control in this country. She lost her mother, Mrs. Ethel Lance and two cousins in the deadly 2015 shooting at the Emmanuel African Methodist Episcopal Church, Charleston, SC, the first independent black denomination in the United States. She described what a warm and welcoming congregation they had been – even to strangers. She has been traveling the country fighting for gun control while collaborating with those advocating for new gun laws. CLICK HERE for information about her book about hope and forgiveness after the Charleston massacre.

The Reverend Sharon Washington Risher was born and raised in Charleston, SC. She heard the call to ministry in 2002 and left North Carolina to attend Austin Presbyterian Theological Seminary, where she earned her Masters of Divinity degree. Sharon served as Staff Chaplain and Trauma Specialist at Parkland Hospital and as Associate Pastor for Congregational Care at Rice Chapel AME Church in Dallas, TX. – On June 17th, 2015, a horrific tragedy happened: Sharon’s dear mother, Mrs. Ethel Lee Lance, was killed in Charleston at the Mother Emanuel African Methodist Episcopal Church, along with two cousins, a childhood friend, and the others murdered in that massacre. Since that time, Sharon has been an advocate for revising gun laws, and is a spokesperson for the grassroots advocacy groups Everytown Survivor Network and Moms Demand Action for Gun Sense in America. She has appeared on CNN, BBC Radio, Good Morning America, and CBS and has been interviewed or written for Time, Marie-Claire, Essence, Texas Monthly, Vogue, and VOX. Her advocacy work brought her to the White House, where she witnessed President Barack Obama sign executive orders pertaining to new gun laws. Sharon has shared her story of loss, forgiveness, racism and gun law reform with audiences across the United States.
Sharon haw two grown children and enjoys reading, cross-stitching, growing tropical plants and listening to a variety of music. 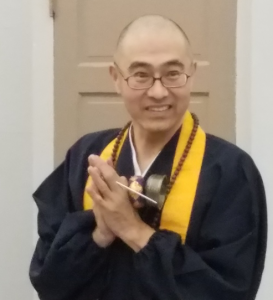 An encouraging message reached us from Pittsburgh where a mass shooter targeted the local Jewish community last October. Rabbi Jeffrey Myers of the Tree of Life Synagogue could not join us in person but spoke to us via a video recording. In the video, Rabbi Myers powerfully envisions a day when groups such as Black Lives Matter and the #metoo movement wouldn’t be needed because all lives will matter and all people will be respected. 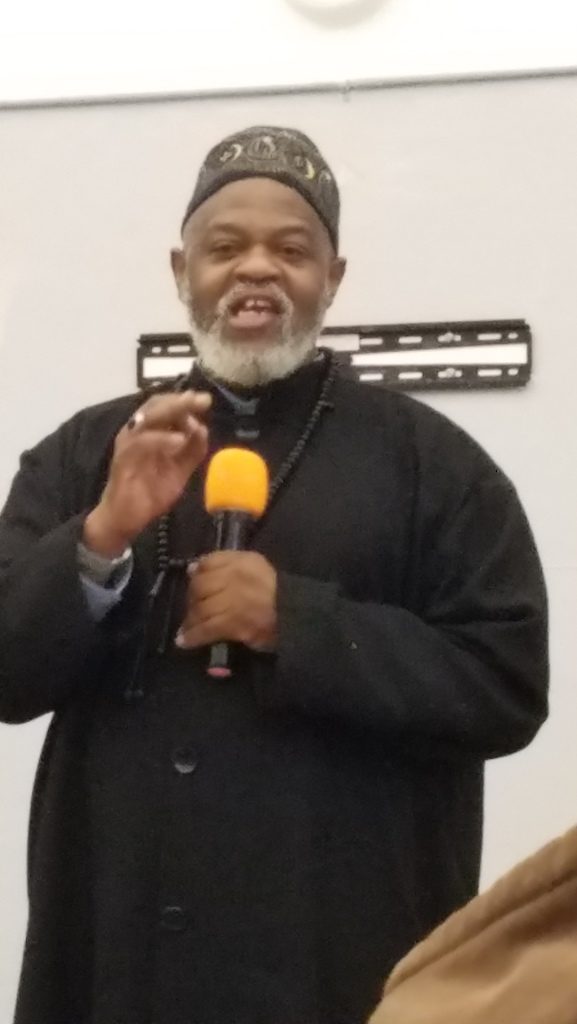 We also were inspired by Imam Al-Hajj Talib-Abdour Rashid, the religious and spiritual leader (Imam) of The Mosque of Islamic Brotherhood Inc. located in Harlem, NY. The mosque is the lineal descendant of The Muslim Mosque Inc. founded by the late El-Hajj Malik El-Shabazz (Malcom X.) in 1964. Imam Talib is also the Chairman of the Association of African American Imams.
In his presentation, he addressed the systematic racism that unfortunately still exists in this country and about the challenges of being African American and Muslim.

This event was conceived and organized by PT members, Robyn B Donati and Gloria Williams.