We marked #20yearslater with our virtual film festival, centering it on the theme of peace and justice. It featured films across 20 years, including brand new releases,
each film was paired with a live panel featuring producers, directors,
9/11 family members, and/or subjects of the film, open to audience questions.
The festival was curated by September Eleventh Families for Peaceful Tomorrows,
a nonprofit organized by relatives of the victims of the September 11th attacks.

We are thankful for the insights and the generosity of the filmmakers and distributors!

A Message from director and screenwriter James Schamus

Films Featured in the Festival:

No Responders Left Behind, Directed by Robert Lindsay

No Responders Left Behind follows 9/11 social activists Jon Stewart and John Feal as they take on the U.S. government to ensure Health and Compensation for thousands of ailing First Responders who are dying from toxins released at Ground Zero.
Find out more information about the film through the FealGood Foundation.

We are Many, Directed by Amir Amirani

This fearless, thought-provoking documentary details the remarkable story behind the first ever global demonstration. Whilst the protests did not stop the Iraq War, the movement inspired a new generation of activists. The legacy of the demonstrations continued to influence campaigners across the world; including activists in Egypt during the Arab Spring as well as Black Lives Matter campaigners in the United States. ‘We Are Many’ features testimony from organizers, activists, celebrities and politicians who provide a unique insight into the protest itself and the global context which led to the marches.

In Our Son’s Name, Directed by Gayla Jamison

An intimate portrait of Phyllis and Orlando Rodríguez, whose son, Greg, dies with thousands of others in the World Trade Center on September 11, 2001. The bereaved parents choose reconciliation and nonviolence over vengeance and begin a transformative journey that both confirms and challenges their convictions.

Finding Our Voices is about standing up for what you believe. Not just another Iraq war film, this is a movie about patriotic Americans living their conscience. This film celebrates our first amendment rights and our responsibility to participate in our Democracy. This movie explores the passion and determination of eight men and women who sacrifice their jobs, give up their retirement and risk imprisonment in their patriotic dissent of the war in Iraq. It is a film about courageous Americans who show with their actions, the power we all have, and must use if democracy is to survive. The film chronicles people like Adele Welty, who lost her son, a firefighter on 9/11/01. Welty, a member of September Eleventh Families for Peaceful Tomorrows, says, “I knew the best legacy I could build for Timmy would be one of peace, to try to stop any more innocent civilians from being killed.”
Read September 11th Families for Peaceful Tomorrows: Turning Tragedy into Hope for a Better World for more information.

Michael Shulan was a struggling novelist and co-owner of a storefront space in New York’s trendy Soho neighborhood. The attacks on the World Trade Center changed his life forever. He and three friends turned his Spring Street space into a now-famous crowdsourced photo exhibit called “Here Is New York.” For five years, he was known as the world’s leading expert on 9/11 photography. Then, the lifelong outsider was invited to be part of something big. Shulan was named the Creative Director of the National 9/11 Museum at Ground Zero. This is the story of his dream job and how it turned against him. His vision of an open, inclusive, participatory place for America to engage in the painful, personal story of 9/11 goes wrong. His role as creative leader turns into a daily battle to keep his vision alive.
The film’s website has additional information, including about how the film was made, those featured,  photographs, and press.

Based on the NY Times best-selling memoir “Guantánamo Diary” by Mohamedou Ould Slahi, this is the true story of Salahi’s fight for freedom after being detained and imprisoned without charge by the U.S. Government for years. Alone and afraid, Slahi finds allies in defense attorney Nancy Hollander and her associate Teri Duncan who battle the U.S. government in a fight for justice that tests their commitment to the law and their client at every turn. Their controversial advocacy, along with evidence uncovered by a formidable military prosecutor, Lt. Colonel Stuart Couch, uncovers shocking truths and ultimately proves that the human spirit cannot be locked up.

CLICK HERE to get to view a webinar we arranged with Mohamedou and Elizabeth in the past as well as to the Study Guide we put together to facilitate classroom discussions about the film.

OUR PANEL DISCUSSION featured Mohamedou Ould Slahi (the original Mauritanian) and PT member, Elizabeth Miller. It was moderated by Nicholas Perrotti. CLICK HERE to access the recording and  by using passcode 6nnH#N8Z

Our 2006 International Network for Peace Conference brought together peace partners from all over the globe. This 32 min video summary of the event relays which issues were discussed and the arc of actions September Eleventh Families for Peaceful Tomorrows’ members and international partners organizations envisioned going forward.

An idealistic Senate staffer leads an investigation into the CIA’s post-9/11 Detention and Interrogation program, uncovering the lengths to which the agency went to hide a brutal secret from the American public.

An Indian Muslim man with Asperger’s syndrome takes a challenge to speak to the President of the United States seriously and embarks on a cross-country journey.

CLICK HERE to view the trailer. You can watch the film on Kanopy, Amazon Prime or through your local library. 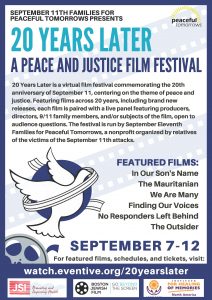 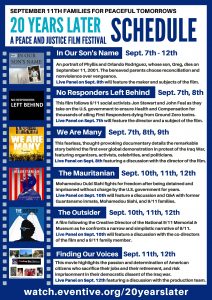 Goals of the Festival:

1) To promote productive discussion and problem-solving, centering around the theme of peace and justice, through an assortment of films relevant to the topic.
2) To serve as a commemoration to the victims of the September 11th Attacks, and all events ensuing.
3) To educate young people who have no memory of or who were not yet born on the day of the 9/11 Attacks.
4) To build awareness and support for September 11th Families for Peaceful Tomorrows, and our mission to turn our grief into action toward peace.

The festival was centered around peace and justice, and featured various documentaries and interpretive narratives of 9/11. Each film had a live panel to which students and other viewers were able to submit questions in real time.

View all posts by Peaceful Tomorrow →