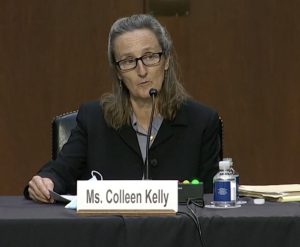 Good morning, Chairman Durbin, Ranking Member Grassley,
members of the committee. Thank you for this opportunity to share my  story.

I am a family nurse practitioner in the Bronx, New York, and the
mother of three grown children. My younger brother, Bill Kelly Jr., was
killed in the North Tower of the World Trade Center on September 11th.
Bill was 30 years old, and starting to come into his own. He was a
decent chef, a bartender, an ever-hopeful duck hunter, and a guy as
comfortable in surfing shorts as in a business suit. Bill worked at
Bloomberg Tradebook, and his four sisters would fight over who got to
be Bill’s ‘date’ at the annual holiday party.
Bill didn’t work at the Trade Center. He happened to be there for a
conference he had repeatedly asked his boss for permission to attend.
Bill’s boss acquiesced, so in a twist of fate, Bill was in the wrong place,
at the wrong time.
Bill sent messages to his co-workers saying he was trapped. At
first, he was hopeful that the fire department would save him.
343 firefighters lost their lives that day attempting to do just that.
I tell you this to emphasize that each of the 2,977 people murdered
on September 11th has a family, co-workers, and friends. And for all of
us, and this country, there has been no justice; no accountability.
Bill, my three sisters, and I grew up in a “divided” household of
sorts. My mom is a Democrat and my dad is a Republican. So I feel
comfortable sitting here today, in another divided household. This feels
like my family dinner table, only with a few extra friends.
Last week, I asked my 84-year-old father for his thoughts about the
9/11 military commissions. His reply?, “This is not justice.”
After 9/11, I co-founded September 11th Families for Peaceful
Tomorrows. Each of our 260 members lost a relative on 9/11.

We all believe that the rule of law is a bedrock principle of our nation, and after
9/11 we expected our government to uphold the rule of law in seeking
accountability for our relatives’ deaths.
Yet this has failed to happen.
Peaceful Tomorrows obtained official observer status in the
commissions because we felt it was important to bear witness not only
for our loved ones, but for the outside world.
So I come to the following conclusions having observed the
commissions both first hand at Guantanamo, and at family viewing sites.
Five men in Guantanamo stand accused of planning and supporting
the 9/11 attacks. A trial has not begun. Instead, we have heard nine and a
half years of argument in PRE-trial hearings.
And instead of learning how and why the attacks that killed our family
members were carried out, we have listened to seemingly endless
litigation largely concerned with obtaining classified information about
the defendants’ torture.
Families have watched in frustration as one judge after another has
been replaced. There is a new acting chief prosecutor, a soon to be new
chief defense counsel, a new learned counsel for one of the five
defendants, and numerous other personnel changes. I have lost count of
the number of Convening Authorities, but it’s more than ten.
In May of 2012, I sat with Rita Lasar watching the arraignment of
the 9/11 accused. Rita’s brother Abe died when he stayed behind to
assist a disabled co-worker on the 27th floor of the North Tower.
Rita is now deceased.

In 2017, I was on the plane to Guantanamo with Lee Hanson, the
only 9/11 family member to be deposed in the pre-trial hearings. Lee
Hanson lost his son, daughter-in-law, and granddaughter on Flight 175.
Mr. Hanson is now deceased.

In 2019, I was on a boat crossing Guantanamo Bay with Alice
Hoagland, mother of Flight 93 hero Mark Bingham.
Alice Hoagland is now deceased.

The point is that family members want a measure of accountability
and justice before our deaths.
Today, I am asking this Committee to acknowledge that the
military commissions have failed and to help us gain some form of
resolution through plea agreements in the 9/11 case.
We understand that in exchange for guilty pleas the government
would likely drop the death penalty. What we would hope to finally get,
however, is answers to our questions about 9/11—information that we
have been denied for two decades as the case drags on.
Some may not see this as justice. Indeed, it is not the outcome our
organization advocated for at our founding.
But it is a way forward –
Twenty years ago, while people around the globe watched the
towers burn, I watched my brother Bill being murdered, one agonizing
moment after another. My family still does not have any of my brother’s remains.

I am asking this Committee to deliver the next best thing – a resolution
to the 9/11 cases that provides justice for the deaths of our family
members, answers to our questions, accountability for unlawful acts, and
a path to closing Guantanamo.
Perhaps then, this long-festering, collective national wound can
truly begin to heal.

Thank you and I look forward to your questions.