A Primer on the 9/11 Military Commission at Guantanamo

A Path Forward for 9/11 Victims and Family Members

In May of 2012, five men were charged in a military commission at the Guantanamo Naval Base with having planned and supported the 9/11 terrorist attacks, but a trial has not yet begun. And according to U.S. Marine Corps Brigadier General John Baker, former Chief Defense Counsel of the military commissions, we may be further today from the start of a trial than we were five years ago. How can this be?

September 11th Families for Peaceful Tomorrow has prepared this “Primer on the 9/11 Military Commission” for people injured and family members of those killed in the terrorist attacks of September 11, 2001. We offer a brief history and analysis of why there has been no justice or accountability for the 9/11 terrorist attacks and what we believe is a path to meaningful judicial finality.

Peaceful Tomorrows is the only 9/11 family organization to have applied for and been granted non-government organization observer status to attend the military commissions at Guantanamo. We have sent a representative to every pre-trial hearing since 2015. Additionally, our members regularly view the proceedings via closed-circuit television, read transcripts and motions, and discuss the case with prosecution and defense attorneys.

Current Status of the 9/11 Military Commission

More than 20 years after the 9/11 attacks and nearly 10 years after the arraignment of Khalid Sheik Mohammad and four others for the murder of nearly 3,000 individuals, the 9/11 case remains stuck in a pre-trial phase. Instead of being presented with evidence against the defendants, we have instead listened to arguments concerning more than 800 motions, and years of legal disputes over “discovery,” or what evidence will be admissible in a trial – should there ever be one.

The legal arguments are complex and involve issues of national security and the extensive over-classification of a great deal of information, especially concerning the torture of the five 9/11 defendants. This over-classification has significantly complicated the progress of the pre-trial hearings. The bottom line is this: the government wants to use statements the defendants made but keep crucial details of their torture classified. The defense attorneys want much greater disclosure of the details of the torture and of their clients’ medical records after that torture.

These legal arguments could go on for years more. This is made even more likely because of the troubling and increasing turnover in key legal personnel. One lead defense attorney was replaced in 2019; more recently the Chief Prosecutor and one of the lead civilian attorneys for the government retired, as did the Chief Defense Counsel. Most concerning has been the turnover in judges. As of today, there have been four judges – eight if you count those who played only an administrative role or had to recuse themselves. Over the years the presiding judges have at times overturned or set aside their predecessors’ decisions.

If a trial does begin, in 2024 or 2025, it could easily last two or more years. Any sentence would be immediately appealed, first in the U.S. Court of Military Commission Review and then through the federal court system, very likely up to the Supreme Court.

In a “standard murder case” this frequently takes years. Clearly the 9/11 case is not standard, so what the appeals process might look like is uncertain. There is even the possibility that a verdict could be overturned. Recently, in the case of the Boston Marathon Bomber, the sentence was set aside by the U.S. Court of Appeals for the First Circuit and returned to the lower court for additional hearings.

Pre-trial agreements, or plea agreements, are common practice in federal court trials, including cases involving multiple murders. Recently an ISIS terrorist pled guilty, in a U.S. District Court, to hostage taking of four Americans and conspiracy to murder U.S. citizens outside of the U.S. He is now jailed for life.

The military commissions at Guantanamo are a judicial system without legal precedent. This allows for pre-trial agreements in the 9/11 case to be creative and wide-reaching. Victims and victim family members could play a role in shaping any agreements. What might we ask for?

First and foremost a defendant would plead guilty and agree to never appeal his sentence. In exchange, the government would no longer seek the death penalty; this would be partly in recognition of the torture each of the defendants experienced. Once agreements are made with all five defendants, we would have assurance that the case of U.S. v. KSM, et.al. is closed, and some measure of judicial finality will be achieved. In addition, we believe 9/11 families and victims are entitled to: 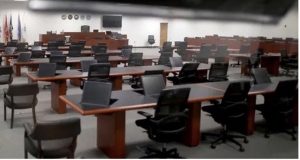 Action You Can Take

Contact the Rule of Law Committee of September 11th Families for Peaceful Tomorrows if you want more information or if you want to work with us to support plea agreements in the 9/11 case:

Contact the prosecuting attorneys of the 9/11 military commission through the Victim Witness Assistance Program (VWAP) of the Office of the Chief Prosecutor and ask about plea agreements:

Contact President Biden as a family member seeking justice and accountability—write “9/11 Victim Family Member Seeking Justice” on the front of the envelope:

The Senate Judiciary Committee held a hearing on Guantanamo and the military commissions on December 7, 2021.  You can watch a recording of the hearing at:
https://www.c-span.org/video/?516557-1/senate-hearing-guantanamo-bay-prison

You can find transcripts of the testimony of the witnesses at:
https://www.judiciary.senate.gov/meetings/closing-guantanamo-ending-20-years-of-injustice

We particularly recommend you read the testimony of General John Baker, Chief Defense Counsel of the military commissions:
https://www.judiciary.senate.gov/imo/media/doc/Baker%20Testimony2.pdf

The Center for Ethics and the Rule of Law at the University of Pennsylvania recommended resolving the military commissions cases by plea agreements.
https://www.penncerl.org/files/cerl-working-group-statement-13-recommendations-to-close-the-guantanamo-bay-detention-facility/