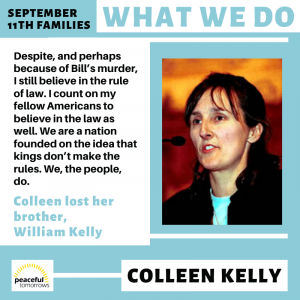 Colleen Kelly is troubled “that our loss was being invoked to ultimately cause so much suffering in others elsewhere… My focus is outward. It has been for a long time,” she explains. “Yes, it (the organization) was grounded in our personal loss, but it looked outward and it looked forward. That’s one of the great strengths.” Colleen Kelly has been chairing our Guantanamo Committee for many years. 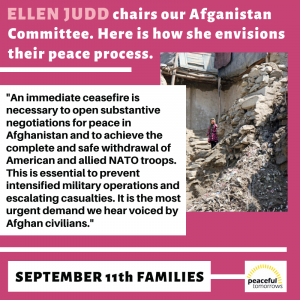 “It remains important to continue our rejection of war in Afghanistan, our work to reduce and prevent civilian casualties, and our calling for countries that have fought in Afghanistan to provide reparations to the Afghan people,” shares Co-Chair of the Peaceful Tomorrows Afghanistan Committee and PT member, Ellen Judd.

“With a group like Peaceful Tomorrows, I am advocating for my people and by that I mean civilians. What we’ve learned is that most of the deaths in war in the 20th century were civilian deaths. I think it’s important to have solidarity with those people – whoever they are – around the world,” says co-founder of September Eleventh Families for Peaceful Tomorrows and writer, David Potorti. 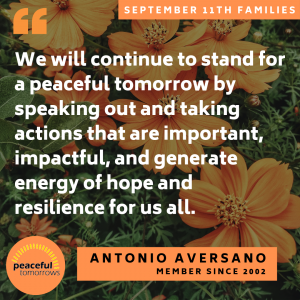 PT member, Antonio Aversano, who grew up in Troy, lost his father at the World Trade Center. He discusses his own personal transformation after 9/11, and how groups like September Eleventh Families for a Peaceful Tomorrow rose up to respond to the call for war in a nonviolent way. 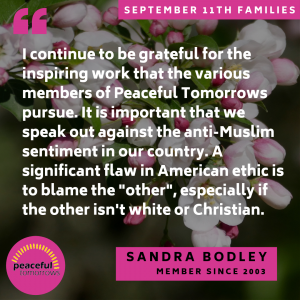 Quoting the September Eleventh Families for Peaceful Tomorrows report on Afghanistan from 2008, Sandra Bodley writes: “The idea that more U.S. troops are the answer to Afghanistan’s woes is misguided. Rather than a military escalation, what is needed is a shift away from militarism toward diplomacy, aid and reconstruction.” PT member, Sandra Bodley, lost her niece Deora Bodley on 9/11. 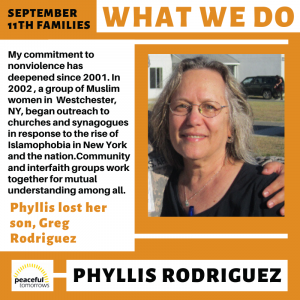 “Peaceful Tomorrows believes along with Martin Luther King Jr. that “wars are poor chisels for carving out peaceful tomorrows.” There is no real path forward unless we face the ugly implications of our failed policies and oppose them,” writes PT member Phyllis Rodriguez.

“I am now 26 years old, which means I was only six when 9/11 occurred. I remember it vividly, however. It was a terrible, tragic, and eye-opening situation, which changed my life forever. But I am the last generation with such firsthand recollection of 9/11. People old enough to vote, drink, and go to war now have no memory of the attacks that September, or weren’t even alive.
They do not remember the world coming together. They do not remember what it felt like when we were lied to about Iraq. Most know little about Guantanamo Bay. Twenty years later, we need to think about their story and how we can tell them ours. People don’t all know us. People forget about 9/11. Therefore, as the anniversary of the attack’s approaches, as the world once again turns their eye, the most important, most vital thing we need to think about is how to pass our own stories to them so that these stories can inform their own,” writes PT member and organizer of our 20 Years Later: Peace and Justice Film Forum, Ari Radcliffe-Greene. 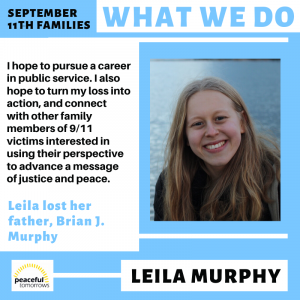 … “I became more involved with Peaceful Tomorrows and have found some solace in working with other members to end the military commissions, close Guantánamo, and push for safeguards against endless war. But sometimes, in meetings with elected officials or politicians, when we introduce ourselves by identifying those we lost, I cringe, and wonder whether I am just reinforcing a pretense of enlightened victimhood that has little in common with the lived experience of traumatic loss, “ writes PT member and Rule-of-Law-Fellow, Leila Murphy.

“During his time in detention, Mohamedou demonstrated resistance and resiliency by writing, and after his release, he shared his story of pain. He taught me that speaking out, however difficult, is necessary. I am honored to be his friend and inspired by his example and, since last year, have been working with the organization September 11th Families for Peaceful Tomorrows—a group of individuals who are turning their suffering into a call for a better world—to advocate for policies like the shutting down of Guantanamo,” writes PT member and Rule-of-Law-Fellow, Elizabeth Miller.

“What I find so painful today after the collapse of Afghanistan’s government and its military is that 20 years ago I believed the U.S. invasion of Afghanistan was justifiable as self-defense. I hoped that clearing out Al-Qaeda training camps would take no more than a year or two. Instead, the U.S. and its allies foolishly invaded Iraq in 2003 while trying to do nation building in Afghanistan, a country whose history and culture they never understood. Look at the appalling price in blood and treasure we, and especially the Afghans, have paid for that lack of knowledge,” writes PT member and author, Bill Tammeus. 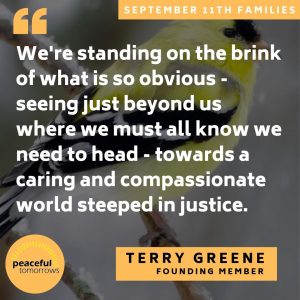 “They desperately wanted to portray families as wanting some notion of closure through revenge and getting bad guys, which could be whole countries or a whole religion. Twenty per cent of the world’s people are Muslim. That somehow that would solve things or make the world better? I think for some families, it was a consolation to feel like we were on the offense, but for the ones I was meeting, it was mostly painful to have our loved ones used that way. All the people we met recognized that that’s not the reaction, and they all felt like it was more human connections and building bridges, rather than bombing them, that would make for a better future,” says Terry Greene. 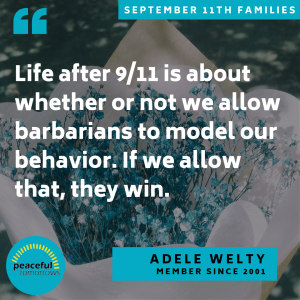 “The fact that my country could do that is so barbaric. It really bothers me. What kind of people are we that we could do that to other human beings, and did we really believe that what they were saying in response to the torture was real, or were they just saying it to stop the torture?” asks PT member, Adele Welty as she reflects on the effect torture had on Guantanamo detainees. 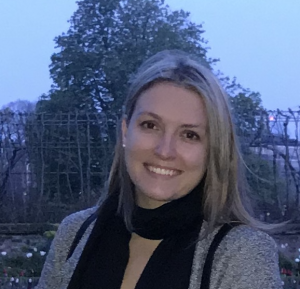 ”You know, the other is not so other as we think. If we take the time to get to know one another and just being open , we don’t have to be driven by our fear and our hate,” said PT member and Project Director, Terry Greene.
PT member and Rule of Law Fellow, Elizabeth Miller expressed a similar point of view during a panel discussion of The Mauritanian, a film we showed during our #20yearslater Peace and Justice Film Festival: “I was raised in a Catholic household and all the Muslims that I had the privilege of meeting, I was, like, wow , all our religious traditions are quite similar. That just goes to show that until you make those connections, until you take a second to learn about somebody else, you are misinformed.”

”We really need to question war that causes civilian casualties…..Even leaders of our armed services tell us that civilian casualties do not lead to a peaceful future,” shares PT member and filmmaker, Terry Rockefeller during her hour long conversation with Jimmy Durchslag. 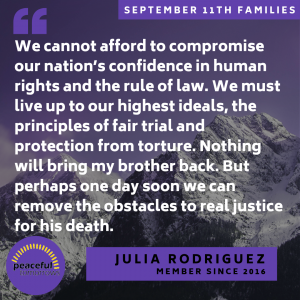 PT member and historian, Julia Rodriguez, shares about how she speaks to her kids about loosing her brother, Greg Rodriguez, on 9/11.

”I read the book and was just sick to my stomach. I felt a guilt like I had never, ever felt before. I felt so complicit and I realized I had to reach out to him. I need to say that I am sorry. He experienced what he did on our behalf,” shares Elizabeth Miller about reading the book “Guantanamo Diaries” and the beginning of her friendship with former Guantanamo inmate, Mohamedou Ould Salahi. 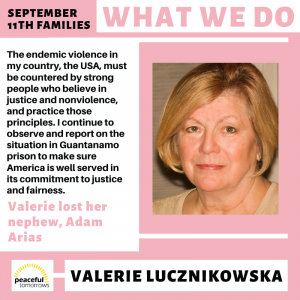 ”Keeping Guantanamo open will mean that we will never get justice,” says Valerie Lucznikowska about what keeping the prison at Guantanamo Bay, Cuba open signifies.

PT member, Phyllis Rodriguez , shares about the healing aspects of her  friendship with Aicha El-Wafi. In her work, Phyllis had publicly opposed the death penalty of alleged 9/11 conspirator, Zacarias Moussaoui, Aicha’s son. Asked about her understanding of the concept of forgiveness, she responds that after a long and painful process, she came to the conclusion that forgiving “is being able to accept another person for being human and fallible.  She further explained: “I do not forgive the act, but try to understand why someone has acted the way they acted which is part of the process to forgive “. 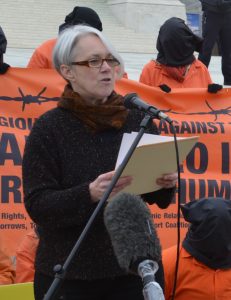 ”I held my breath in those days immediately following the attacks [of 9/11]….and then – of course – when the first bombs hit the soil of Afghanistan, I realized we’d lost an opportunity,” reflects  PT member and filmmaker, Terry Rockefeller.